You're here: Home » Should You Invest in Super Bowl Advertising? Super Bowl advertising. Yes or no?

On Sunday, when the Seahawks face the Patriots (will deflate-gate be an issue???) advertising will cost $4.5 million per 30 seconds, according to Yahoo, a 12% hike over last year’s prices. Of course, what advertisers pay varies greatly depending on a variety of factors, but $4.5 million is still a LOT of money.

So, can your firm afford to do Super Bowl Advertising or should it simply be a pass this year?

Why use Super Bowl advertising?

The Super Bowl gathers more eyeballs in one place than any other event in human history. Last year, 111.5 million people (223 million eyeballs) watched the Super Bowl — a game that ranked as one of the biggest blowouts in Super Bowl history. Where else can you reach over 100 million people?

Super Bowl advertising builds buzz around your brand. For instance, the Apple “1984” commercial launching the Macintosh Computer is credited with saving the brand.

Other brands haven’t had the same luck, which explains why some brands are pulling out of Super Bowl advertising this year and many are cutting back. GoDaddy even pulled their ad scheduled to air on Sunday after criticism from animal lovers — although they’ve committed to replacing the ad with something less objectionable rather than lose the chance to continue their march toward being a household name in domain registration.

Of course, advertising in the Super Bowl isn’t just Super Bowl advertising anymore. Instead, brands use the entire month to preview their ads, posting teasers online, in print, on movie trailers, and other media to build buzz for their Super Bowl Ads. In fact, the surprise is gone. By the time the game airs on Sunday, only the game itself remains unseen.

Why not spend on Super Bowl advertising?

Of course, some newcomers, enticed by promises they’ll rise above their relative obscurity, are filling the void. Among them, Loctite, Wix (the website building platform), and Mophie (the smartphone case manufacturer). It’s an open question of whether they’ll see a return from their gamble or fail as did Groupon when they made the foray into Super Bowl advertising.

Spending $4.5 million for a single Super Bowl ad isn’t for the faint of heart — or small businesses. The risks are enormous — just ask GoDaddy, who paid for some of the least popular Super Bowl commercials in recent years and are scrambling to replace this year’s scheduled ad.

In fact, just as the rewards are enormous, so are the risks. Just ask advertisers who paid for some of the worst ads in Super Bowl history, according to the New York Post:

Other don’ts for your Super Bowl advertising:

Looking at AdAge’s growing list of who’s airing Super Bowl commercials this year (and who’s not), you’ll see some trends in this year’s Super Bowl creative strategies, especially related to brands’ use of social media. 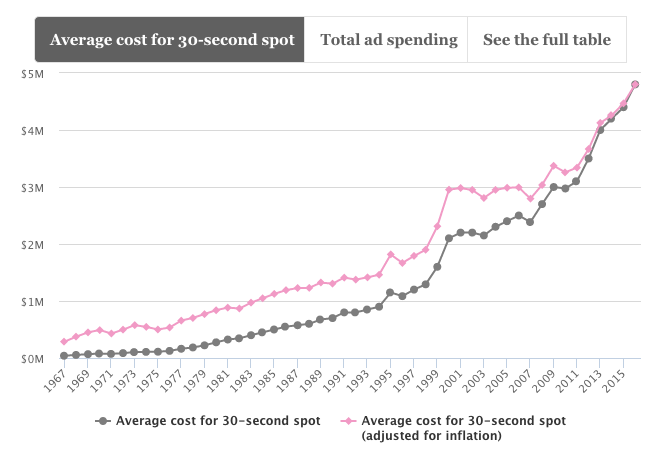