You're here: Home » 5 Business Models to Replace the Advertising Model

Just in case you’ve been on a desert island somewhere and didn’t get the memo, the advertising model is dead. Members of Gen Z never watch live TV, preferring YouTube, and sports is really the only live TV watched by most Americans under 50, as you can see from the graphic in the next section. Yet, the advertising model

Just as viewers found ways around the advertising model on TV, such as skipping or turning to paid streaming sources with no commercials, they’ll likely find alternatives to escape advertising in digital media. So, find another business model to replace the digital advertising model before it’s too late.

Death of the advertising model

The advertising model is dead all over. Think about it for a minute. A 30-second commercial in the Super Bowl topped $5 million this year — an astounding figure. When you add in the costs of talent and other production costs, that single ad might cost a firm double that amount. Yet, TV consumption dwindled, especially among younger viewers, as you see below. 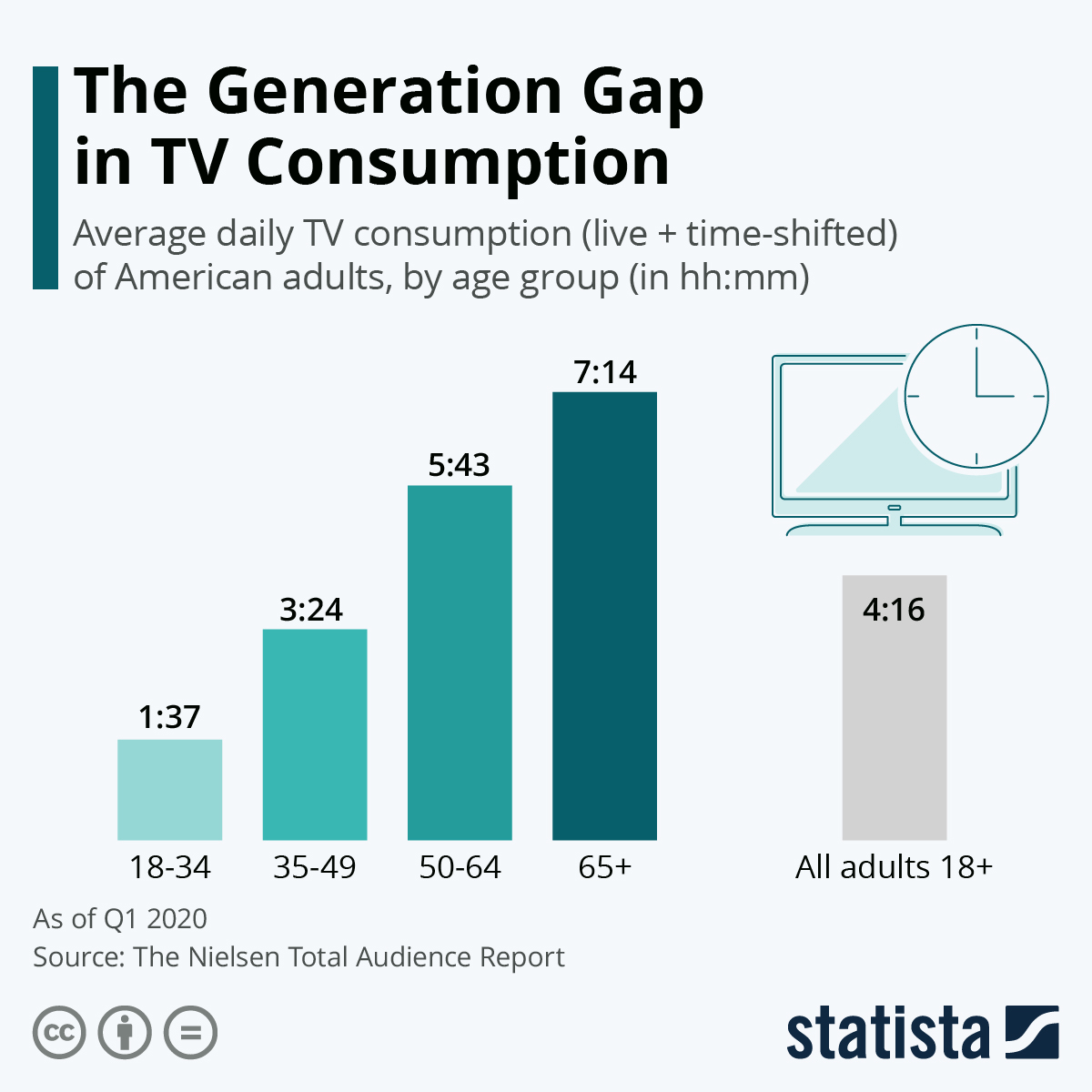 You will find more infographics at Statista

And, many of those viewers record live TV, with the exception of sports, and watch it later, skipping through the commercials. Face it, no one likes commercials.

But, you might say, “look at the reach you get for a mere $5 million for a Super Bowl commercial!”

True. The Super Bowl draws an enormous crowd; many of whom are there just to see the new commercials. But, despite a few high-profile successes, the failures of Super Bowl ads to deliver value to advertisers is a legend. For every Budweiser Clydesdale that wins our hearts, you have many Nationwides, GoDaddys, and other outright losers.

And that’s just the Super Bowl — the grandaddy of advertising, with almost no one willing to record the event and watch it later. What hope do other TV genres have to attract customers with advertising?

Look how consumer behavior surrounding other TV programming limits the success of the advertising model. Today, watching live TV is passé. Today’s consumers, especially millennials, record their favorite shows and skip the commercials or watch online with limited or no commercials (using services like Netflix or Hulu). And, since 2010, when the post that started this article was published, people found their remotes, and now 96% skip commercials when they can, a function made easier by new options to easily skip entire commercials blocks offered by many cable providers to viewers who record programs.

In fact, in researching this post, I found a hack allowing you access to a hidden button that makes commercial skipping easier.

And, radio is no different, with consumers overwhelmingly choosing paid options, like Sirius and Pandora, or creating playlists rather than listening to live radio with ads. And, we all know what happened to print, as the number of newspapers seriously shrank from the heyday. Traditional media must find an alternative to replace the advertising model; and fast.

The problem is, it’s often hard to find the content for all the advertising and consumers are fed up. Take a look at this screenshot from the Washington Post — which isn’t as bad as some sites for advertising clutter: 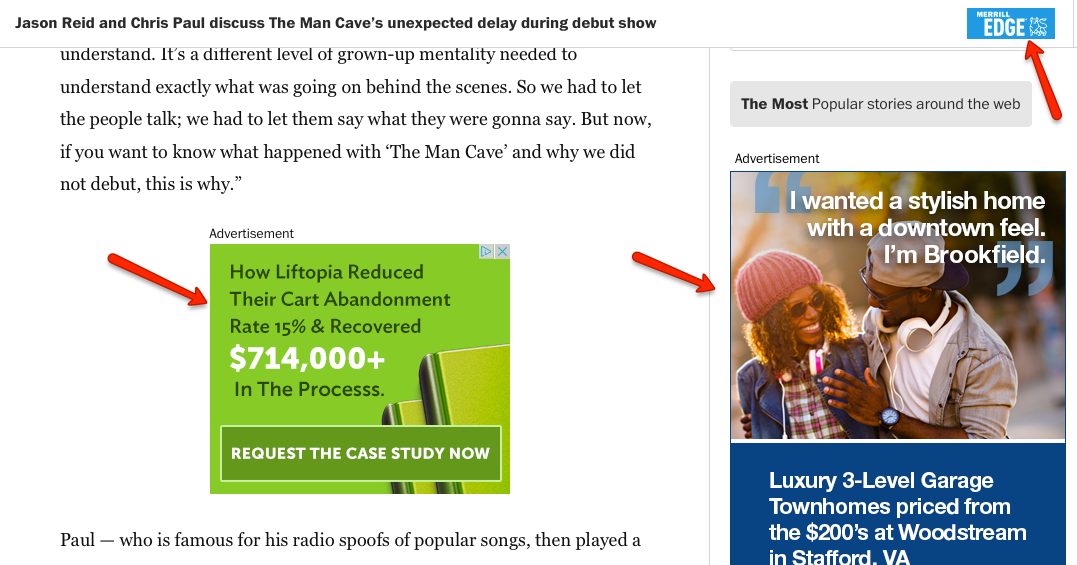 According to Jared Spool, CEO of User Interface Engineering, speaking at the Modev UX conference a few years ago, the average user is exposed to 1707 banner ads per year — that doesn’t even include these little ads tucked into and around the Washington Post copy.

Fast forward to 2020 when estimates show the average consumer sees between 6000 and 10,000 ads every single DAY!

Why so many ads? Because site owners need to make money and see advertising as a viable means to make it.

Plus, major online players like Google and Facebook show exponential growth in their ad revenue, translating to an explosion of ads shown on their platforms [image source]. 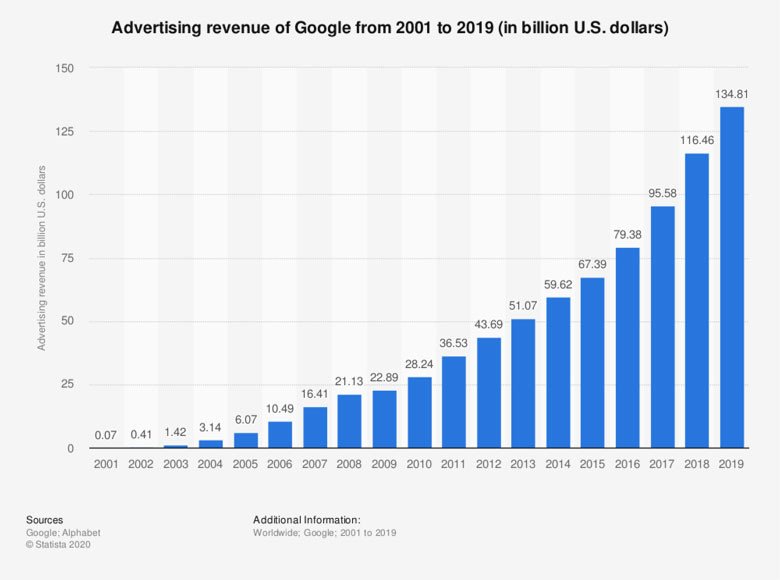 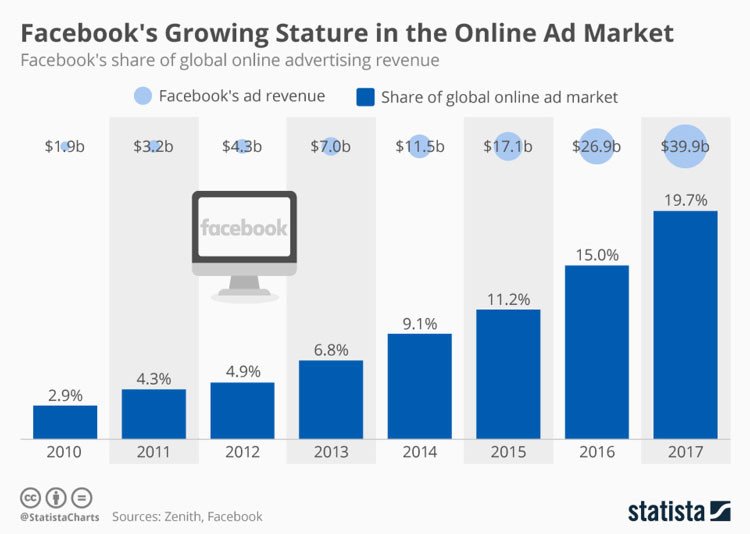 But, does advertising make money?

For a company like Facebook that offers sponsored posts, it makes money for the platform — whether the advertisers see any lift from this advertising is another question, since the answer is pretty murky.

According to Avinash, arguably one of the smartest people out there when it comes to digital metrics, the value of Facebook advertising lies in its ability to build a brand’s Facebook audience and beat EdgeRank (which determines how many followers see your posts — a number that’s declined precipitously to encourage ad spending), not drive your Facebook audience to your website or to convert your audience in some way. Now, I agree with Avinash that there’s value in building a Facebook audience and promoting engagement that goes beyond what’s easily translated into ROI, but that’s gonna be a pretty hard sell to your CFO or board who wants an immediate and clear correlation of advertising spend to ROI.

So, let’s take a look at some stats related to digital advertising — from Jared Spool.

Now, don’t get me wrong. You might have a short-term increase in revenue based on advertising, but, in the long run, you won’t get a sustained ROI from an advertising model. Even viral ads don’t deliver enhanced market performance. Take the KMart ad.
It was genius — funny, on point, viral. Yet, it did nothing for KMart sales, according to Jared Spool. Epic Fail.

Pointing to the need to find something to replace the advertising model, new adblockers do just as their name implies; they block ads from view. Users can ad advertising blockers to their browsers or mobile devices. Apple even comes pre-loaded with ad-blocking given the propensity of users to view websites and social media using mobile devices. A new Kickstarter campaign even offers a pair of glasses able to block ads, not just from online platforms but in real life.

Unfortunately, some of these same ad-blocking programs take payments from advertisers to white list their programs, thus negating the benefit to users.

So, what’s a company to do?

We’ve all been lulled into the notion that advertising is the only model out there. Not only is the advertising model dead, but there are also other, more successful, and less annoying business models out there to replace the advertising model. And, don’t forget that you can find leads online through paid services through a paid user acquisition model that doesn’t rely on advertising.

Newcomers Ello and DIaspora hope to unseat Facebook by providing ad-free social networks. These founders aren’t altruistic, they just recognize that users are feed up with advertising clutter in their social feed and want something where they can interact with their friends without being sold to.

Instead of advertising, Ello offers an advertising-free stream and encourages users to buy little things like stickers and t-shirts. Freemium. Diaspora, asks for donations to support their platform to keep it ad-free.

The New York Times implemented a metered paywall — a sort of freemium model. Users can access their great content, but for users who consume the most product, they’re asked to pay for it thru a subscription. After reading a certain number of free articles each month, users are asked to subscribe to view additional articles. According to Jared Spool, this freemium model generates more revenue for the New York Times than their old advertising model. Unfortunately, even subscribers receive ads along with everyone else.

For media properties, like the NYT, Wall Street Journal, Harvard Business Review, and Washington Post, the biggest problem with the subscription model is it also limits backlinks that benefit SEO and, when posts are shared across social media, non-subscribers can’t access the content, creating dissatisfaction that damages their brands.

You have lots of great, free content on your site. Think about re-purposing that content in the form of books, prints, CDs, and other collections of your content. Sure, folks could still read, see, or listen to your content for free, but many are willing to pay a little extra for the improved utility provided by re-purposing content.

For instance, the Smithsonian has done this for years. They sell prints from their collections and create copies of priceless treasures that you can own for a small price. News outlets sell prints from historic events individually or in collections.

Of course, repurposing content isn’t limited to such tangible products. Live shows re-purpose content and musicians used this model for generations to promote and supplement album sales (something that should be considered in light of copyright issues involved in music sharing — does giving music away for free allow higher profits from live performances and is this an alternative to the reliance of music sales?).

NPR now makes more money by staging performances than it does through pledge drives.

Another alternative is un-bundling products as a means to re-purpose content. iTunes successfully unbundled music so folks could buy individual cuts without having to buy the entire album. What other products can be unbundled to achieve higher revenue than an advertising model provides?

Wanna learn how to fix a broken computer or replace the screen on your smartphone?

These tasks require special tools not available at your local Home Depot. Smart entrepreneurs offer free instructions to fix your problem, then offer a bundle of tools necessary to accomplish the repair.

Of course, this model isn’t novel or limited to tools. You can buy kits to create your own craft projects on Etsy or packages containing all the ingredients for a tasty soup from your local grocery store.

We all have apps on our smartphones. We’re addicted to these apps. And, for many of us spending a few bucks ($0.99 seems to be the sweet spot), is the norm. Here’s data from a Distimo study of in-app purchasing:

Users are so opposed to an advertising model, they purchased millions of downloads of the popular app, Words with Friends, at $4.99 just to avoid advertising contained in the free version.

Insights from the reality that the advertising model is dead